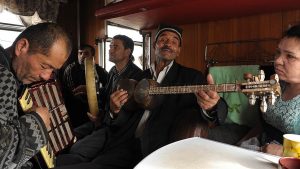 From January 1, 2015, migrants from Tajikistan, Kyrgyzstan and other visa-free countries will be able to work in Moscow only by paying for a patent worth 4 thousand rubles. per month. The corresponding law was adopted yesterday by the Moscow City Duma. Patents will be issued for a period of one month to a year. At the same time, foreigners must pass exams in the Russian language, undergo fingerprinting and buy health insurance. The authorities hope that the new order will legalize guest workers and bring the capital’s budget 12 billion rubles. Experts believe that it is “cheaper to remain illegal,” since legalization will cost a migrant up to 90 thousand rubles. in year.

The law on the cost of patents for migrants in Moscow was passed by the Moscow City Duma two days after Vladimir Putin approved the migration reform.

On November 24, the president signed amendments to the legislation abolishing quotas for attracting labor force from visa-free countries and introducing a patent system instead. The head of the Moscow Department of Economic Policy, Maxim Reshetnikov, recalled in the Moscow City Duma that now migrants can work on patents only for individuals, but from January 1, 2015 this restriction will be lifted.

Recall that from January 1, 2014, foreigners from visa-free countries are allowed to stay in Russia for a total of no more than 90 days within each six months (the rest of the time is prescribed to be outside the country, earlier migrants could enter back at least the next day). Violation of the norm threatens with a five-year ban on entry. According to Mr. Reshetnikov, this has led to an increase in demand for legalization. So, in 2014, more than 700 thousand patents were issued in Moscow for work with individuals (the 90/180 day rule does not apply to them). The mayor’s office hopes that in 2015 patents will legalize the “overwhelming number” of illegal immigrants, equalize the “economic attractiveness of migrants and the local population”, and at the same time will bring 12 billion rubles. to the budget.

The latter circumstance drew criticism in the Moscow City Duma. Deputy Elena Shuvalova suggested that the capital’s budget is interested in the growth of migrants, so their number will only increase. According to Ms. Shuvalova, order can only be brought about with the help of work visas for foreigners, not patents. However, parliamentarian Mikhail Antontsev said that migrants are attracted “not by the budget, but by employers,” and his colleague Yevgeny Gerasimov assured that work visas are much cheaper than patents (state fees for hiring a foreign worker, issuing a work permit and issuing an annual visa are 9 thousand rubles).

The head of the Migration XXI Century Foundation, Vyacheslav Postavnin, a former deputy head of the Federal Migration Service of the Russian Federation, estimated that legalization would cost a migrant up to 90 thousand rubles. per year, taking into account the cost of medical insurance, courses of training in the Russian language and certificates of passed tests. “It’s too expensive. The correct idea to economically regulate the number of migrants has been heavily bureaucratized. People will remain in the shadows, since it’s cheaper to be illegal,” the expert said. The head of the information and legal center “Migration and the Law” Gavkhar Dzhuraeva fears “a wave of fake policies”, explaining that not all migrants will be able to purchase medical insurance. Mr. Postavnin also does not exclude the mass of “fake certificates and references.”